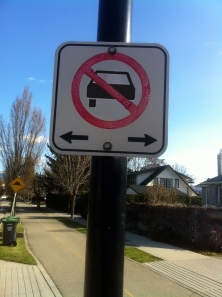 This piece is a digital photo reality-alteration series I have done specifically addressing the relatively un-environmentally aware culture in Kelowna, BC. This piece is called ‘Turning Signs.’ It is a series of five iPhone style photos taken of the many signs which tend to favour drivers and those dismissing their natural environment but have been “turned” to address the lack of environmental care in the local culture of most Kelowna citizens (this of course, not being all Kelowna citizens as many are in fact very environmentally conscious, specifically I am talking about those ATV weekenders, solo car drivers, and generally apathetic green-grass lawn growers). For this piece I have simply taken pictures of signs in Kelowna which feed into this culture or fail to address it and turned them into signs which address this gap in environmental awareness by digitally altering the symbols and words on them. I was inspired by Susan Sontag’s famous ‘On Photography’ which asks where the line can be drawn between the tourist photo, reality, and art as well as the cultural and social implications of each and their functions in regard to humanity as a whole (I am of course greatly simplifying here). The iPhone photo is a phenomenon which feeds into this surprisingly well (“surprisingly” because of the roughly 100 year difference between Sontag’s writing and the invention of the iPhone). People, not for the sake of art and arguably hardly for the sake of their memories, take an obscene amount of photos simply to store on their phones and maybe share on Facebook, thus my decision to make these photos look like iPhone photos. These iPhone styled photos take regular signs like a stop sign and convincingly turn them into a ‘walk sign,’ using every detail from the lettering texture to the grit on the sign posts. I’ve done this to encourage people to spend more time in their natural environments and reversing the car-focused sign’s meaning into a specifically pedestrian-focused sign which then transforms the entire road into a walkway instead of a roadway. I then posted all five of these photos on to Facebook as if they were genuine sightings and proposed that I had stumbled upon them and documented them for the sole purpose of my Facebook album titled ‘iOS Photos’ designated specifically for those photos uploaded from my iPhone. With this I hope viewers will question their signs and the purposes of their natural environment, what it serves as, how they serve it, and how we have perverted it into being our slave; with any luck, viewers will recognize the value of maintaining a mutually beneficial relationship between themselves and the natural environment supporting them. And like these signs suggest, my ultimate hope is that they pay it the respect it deserves. 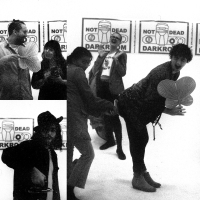